Go Back to Shop All CategoriesHome SecurityLightingOutdoor Inspiration 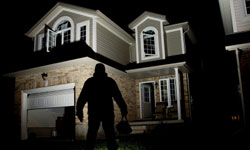 The depressing fact is, it’s not that hard to get into most homes.
©ISTOCKPHOTO.COM/FERTNIG

Every 15 seconds, a burglar breaks into a home in the United States, steals an average $1,725 worth of property and robs the people who live there of peace of mind for years [sources: McGoey, FBI].

It happened more than 2 million times in 2005, and most if not all of those victims thought their home was pretty secure [source: FBI]. They had locks, lights, neighbors and the occasional dog, alarm system, moat and/or window bars. So how’d it happen?

The depressing fact is, it’s actually not that hard to get into most homes. The risk of being seen breaking in is more of a deterrent than a subpar lock, and since most residential robberies happen in broad daylight, that risk is apparently not an overwhelming one [source: FBI]. The problem is that most homes have weak points, and seasoned thieves are pretty good at finding them.

Some weak points are obvious: An open door, for instance, screams “I’m tired of my brand new awesome iPad.” A tree house within stepping distance from an upstairs window is probably not a great idea. A ground-floor window left open on a hot summer night is criminal catnip. Most people are more careful than that, though, yet burglary is still relatively commonplace.

The weak points that lead to most burglaries are somewhat more hidden. They’re easy enough to fix, though. Thoughtfully securing a home against break-in, while never a sure thing, can at least greatly reduce the risk of falling prey to this particular violation. And that doesn’t mean a shark-filled moat. It means making a few changes, additions and behavior modifications that create a less appealing target. In this article, we’ll check out five of those fixes and find out how to implement them effectively.

We’ll start with one of the most common (and most commonly misunderstood) security additions: the ever-popular, easily implemented, often helpful alarm system. 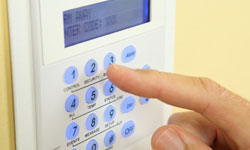 A well-advertised alarm system may deter a thief from entering your home.
©ISTOCKPHOTO.COM/GCHUTKA

Alarm companies portray their product as a cure-all — an impenetrable force field that takes the uncertainty out of home security. In fact, it doesn’t really stop anyone from breaking in. It does, however, make your home a less favorable target if you use it the right way.

Alarms seem pretty foolproof. Install. Activate. Remember to turn on. Trusted people get the passcode, others trigger the blaring. The thing about alarms, though, is that the blaring happens after the fact. Somebody has already broken in, has probably already taken whatever small valuables were closest to the door and has gotten away by the time the alarm company alerts police and the cops arrive.

In this way, an alarm is mostly about peace of mind; if something does happen, help will be on the way quickly. And that’s no small thing. But if you want an alarm to really protect, the criminals have to know it’s there before they target you. That means displaying that unsightly notice with the alarm company’s name on it, and displaying it prominently, outside the house. When people keep it hidden so as not to disturb landscape aesthetics, would-be thieves don’t know the home is any less desirable than the house next door, and the alarm is only an after-the-fact security measure.

The lesson? Alarms are most effective when they’re most obvious. 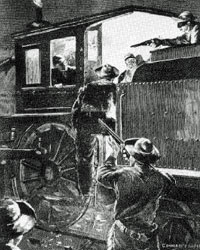 Announcing your vacation plans on your social networks might earn your empty home some unwanted attention — or perhaps attract some bandits to your overnight train.
PHOTO COURTESY OF USMARSHALS.GOV

If we’ve learned anything in the last decade, it’s that the Internet does not discriminate by intention. Pedophiles, hackers, cannibalsand burglars get access like everybody else.

Scary Web-users are a fact of modern life that most of us only have to deal with in a peripheral way — unless we’re too open with sensitive information. And unless we’re unaware of which information is sensitive.

Seems harmless enough: We update our Facebook status to let our friends know we’ve arrived in Rome for two weeks of adventure. We Tweet our intention to meet up for a day of skiing. We post real-time photos of our roadtrip on Google Buzz. We like to share.

The problem is, we can’t be entirely sure with whom we’re sharing. It’s not hard to eavesdrop on social-networking applications, so a robber holding a black ski mask and lock pick could be finding out we’re in Rome, on a ski slope or driving cross-country — finding out he or she could break in with no chance of being interrupted.

Unless the neighbors are particularly alert and involved, of course. So keep your whereabouts off the social networks and on your neighbors’ radar. 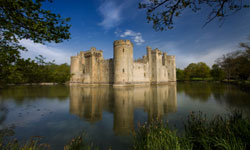 Don’t give away the keys to the castle. Think originally when hiding a spare.
©ISTOCKPHOTO.COM/TIMOTHYBALL

Maybe the doormat was a fine place to hide a key a few decades ago (but probably not). It’s possible fake rocks were secure when the first 1,000 people tucked their keys inside and tossed them in the dirt. And the door frame is still an ideal place to stash a key if your burglar is 4 feet (1.2 meters) tall.

But if it’s the 21st century, and if your would-be thief is post-pubescent, you’re going to have to change it up. When you hide your house key in an obvious place, you may be reducing your inconvenience in the case that you lock yourself out or need a friend to pick up the mail when you’re gone, but you’re increasing the chance you’ll find yourself in the much more inconvenient position of being robbed.

It’s best not to have an extra key anywhere on your property. The safest place for a spare key is with a trustworthy neighbor or two.

If you must hide one, be creative. If your friends can guess your hiding place on the first try, pick a new one. Perhaps a hollow plastic lily pad for the moat.

If you’re constantly locking yourself out, you might just chuck the key and invest in a keypad or fingerprint door lock. Thieves will have a harder time locating your spare when you’re away 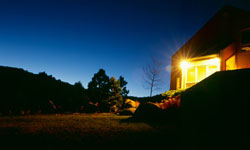 Set your lights on timers so would-be thieves have a harder time telling if you’re on vacation or just working late.
BETH DIXSON/THE IMAGE BANK/GETTY IMAGES

The very first lesson on the very first day of burglary school is: Don’t get caught. The first step to avoiding capture is avoiding detection in the first place (if they can’t see you, they can’t call the cops).

While lots of burglaries take place during the day, darkness is still a great cover. When looking to make your house less of a target, one of the best fixes is lighting, both outdoor and indoor. It’s partly about minimizing the appearance of vacancy inside the house (which burglars look for), and partly about shedding light on would-be intruders outside the house.

Inside, what you need is to establish a routine and stick with it. Lots of burglars will case a target to pinpoint vulnerabilities, such as the occupants going out of town. Get a timer and set the lights to go on at a certain time in the morning and off at a certain time at night. That way, it’ll be harder to tell when you’re gone, whether you’re on a trip or just working late.

Outdoors, it’s all about visibility. The area immediately outside your home is the first line of defense. Yard lights (both front and back) are great, but the solar kinds are probably too dim to do much in the way of security [source: Consumer Reports]. The 120-volt type is better, and should be placed at strategic points such as entries and pathways. Any hiding spots, like clusters of trees or freestanding structures, should also be well-lit. If you’re concerned about light pollution and energy suckage, most of these lights can be hooked up to motion detectors so they only go on when they’re needed. 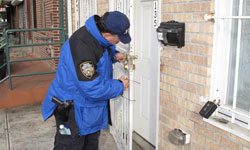 Locks are not the place to skimp on home security.
PHOTO COURTESY OF NYC.GOV

If a thief makes it past your lighting without being deterred, you pretty much have one last shot to stop the break-in — at the point of entry.

That’s typically a door or window. For windows, locks are crucial, and burglar-proof glass is a possible upgrade.

Doors and door locks can get a little more complex. A burglar can gain entry either by kicking in the door or disabling the lock, so you want to address both of those possibilities with the equipment you choose [source: McGoey]:

Even if the thief learns on Facebook that you’re in Italy, ignores the alarm sign in your yard and makes it to your door without being seen, a sturdy lock and a burly door can still keep him or her on the outside.

If he finds the key in your moat, it’s all over. So make sure that lily pad looks like the real thing.

No products in the cart.